As the world celebrates the 210th anniversary of Louis Braille’s birth, the inventor of braille. The University of Lagos appreciates all our visually impaired students/alumni as well as their counterparts around the world, for their ingenuity and resilience.

Celebrate the visually impaired around you today cause today is thier day. The ability to be able to decipher those dots alone proves thier that they are strong and smart.

Here’s a little biography about the inventor of this great form of writing. 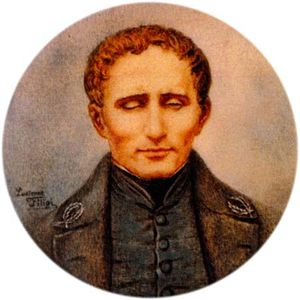 Louis Braille was a French educator who developed a system of printing and writing, called Braille, that is extensively used by the blind.

Braille was himself blinded at the age of three in an accident that occurred while he was playing with tools in his father’s harness shop. A tool slipped and plunged into his right eye. Sympathetic ophthalmia and total blindness followed. Nevertheless, he became a notable musician and excelled as an organist.
Upon receiving a scholarship, he went in 1819 to Paris to attend the National Institute for Blind Children, and from 1826 he taught there.
Braille became interested in a system of writing, exhibited at the school by Charles Barbier, in which a message coded in dots symbolizing phonetic sounds was embossed on cardboard. When he was 15, he worked out an adaptation, written with a simple instrument, that met the needs of the sightless.
He later took this system, which consists of a six-dot code in various combinations, and adapted it to musical notation. He published a treatise on his type system in 1829, and in 1837 he published a three-volume Braille edition of a popular history schoolbook.
During the last years of his life Braille was ill with tuberculosis.